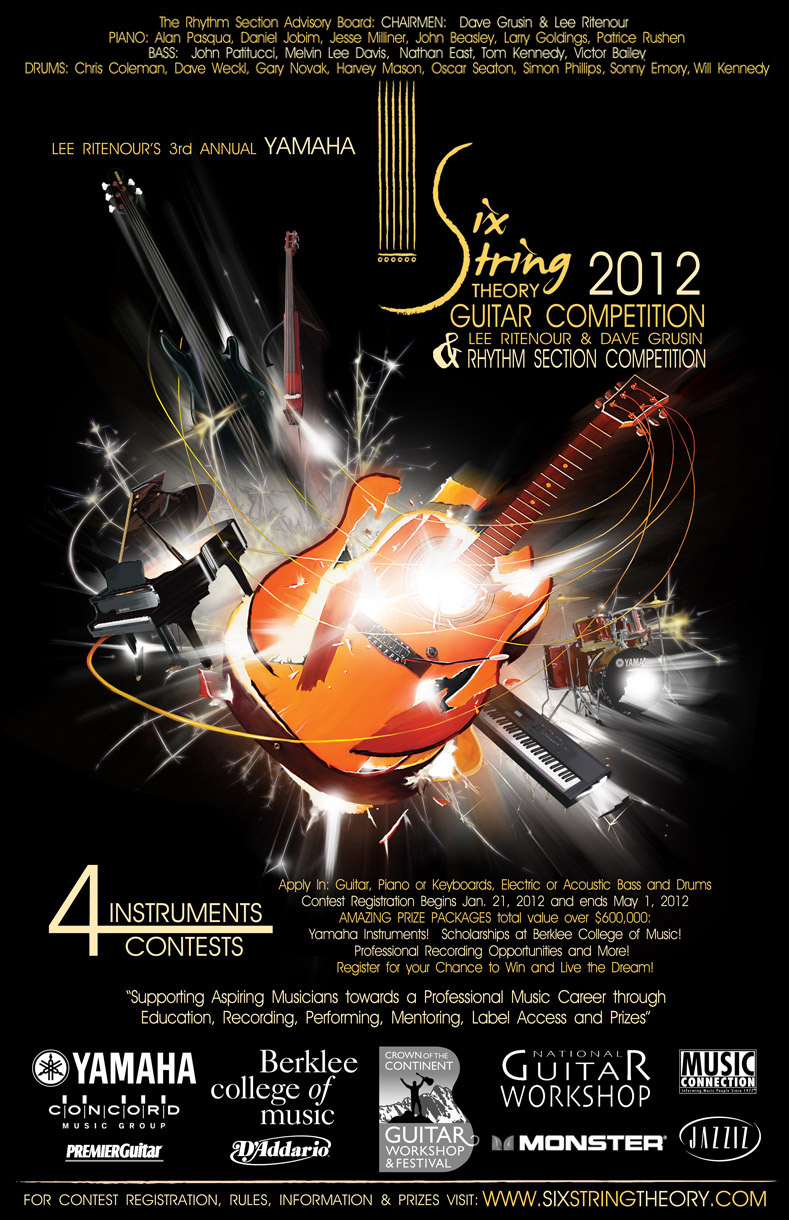 Back by popular demand, Lee Ritenour launches the 3rd Annual Yamaha 6 String Theory Guitar Competition on Jan. 21, 2012, in partnership with Yamaha, Berklee College of Music, Crown of the Continent Guitar Foundation and the National Guitar Workshop. 2012 marks the expansion of the competition to include the Inaugural Lee Ritenour & Dave Grusin Rhythm Section Competition. Oscar® award winning and 2012 Grammy® nominated, Dave Grusin, is head of the Advisory Board for the Rhythm Section competition. Adding 3 new instruments to the competition: Piano, Bass and Drums, the contest grows to reach thousands of aspiring and upcoming new musicians from around the world. The contest kicks off January 21, 2012 and ends May 1, 2012.

The competition is the inspiration of  legendary Grammy® award winning guitarist/composer and producer, Lee Ritenour, who debuted the International competition in 2010 with the release of his all-star guitar CD, 6 String Theory.  The CD has been named Guitar International’s “Best Album of the Year,” Jazziz’ “Publisher’s Album of the Year” – and culminated in Ritenour recently receiving a Lifetime Achievement Award from Guitar Player Magazine.  The CD features 20 world-class guitarists including George Benson, BB King, Slash, Vince Gill, Robert Cray, and the winner of the 2010 competition Shon Boublil. Lee Ritenour’s 2012 album, tentatively titled “Rhythm Sessions” will feature a ‘who’s who’ of all-star rhythm players, as well as a track with the winners of the 2012 rhythm section competition.

The contest continued to flourish in 2011 garnering hundreds of applicants from over 45 countries and giving 36 semi-finalists the opportunity to compete and study at the world-renowned National Guitar Workshop. The 6 finalists attended the esteemed Crown of the Continents Guitar Workshop and Festival where the Final Competition took place. Our 2011 winner, David Browne Murray, is a talented acoustic guitarist from Ireland. With the success of the previous two competitions, it was a natural progression to expand the contest to include piano, bass and drums as well as guitar.

Prizes for the Guitar Competition include Berklee College of Music Scholarship, professional recording and mentoring opportunities, a weeklong stay at the four-star Flathead Lake Lodge in Bigfork, MT for a party of two ($8,000 value), a potential Concord Records recording contract, 36 National Guitar Workshop scholarships, 6 Crown of the Continent Scholarships, Cash, Yamaha Guitars & endorsements as well as other prizes from Monster, D’Addario Strings, and others. There is a special cash prize of $2,500 awarded to the Classical Guitar Finalist (courtesy of sponsor James Stroud), as well as $500 cash prize to each of the 6 Guitar Finalists. Rhythm Section prizes include Berklee College of Music Scholarships, Yamaha instruments; professional mentoring; an opportunity to record on Lee Ritenour’s forthcoming album with Concord Music Group scheduled for release May 2012; an opportunity to perform at the esteemed Crown of the Continent Guitar Workshop and Festival in Montana Aug. 26-Sept. 2, 2012 and other prizes from Monster.  Total value of 4 prize packages over $600,000.

To register and for complete contest rules, regulations and prizes visit www.sixstringtheory.com