The 2014 Six String Theory prize package includes terrific opportunities from Crown of the Continent Guitar Workshop & Festival for each of the 4 winners (1 for each instrument).  COC has been a wonderful sponsor and supporter of the competition the last 3 years and we greatly appreciate what they are doing.  They host one of the most prestigious music workshops in one of the most beautiful natural settings in Montana. Unlike any other workshop around!

Crown of the Continent Guitar Festival and Workshop

This week long event includes 6 days of workshops in blues, rock, jazz, classical, acoustic, singer-songwriter, bass & beginner, workshops in jamming and nightly concerts. All held in the family friendly accommodations of the 4-star Flathead Lake Lodge. This is an intimate setting that provides a unique opportunity for camaraderie and interaction among all participants, faculty and artists in residence.
For the Fifth Anniversary of the Crown Guitar Workshop and Festival, the Foundation is on track to reach its goal of establishing Flathead Valley, Montana as an internationally regarded center for the guitar.

Artists in Residence scheduled to appear:

• Lee Ritenour and his all-star rhythm musicians
• Mike Stern, an alumnus of the band Blood, Sweat and Tears and Miles Davis’ band among many others, and one of the premier jazz and jazz-fusion guitarists and composers of his generation
• John Oates, an American rock, R&B and soul guitarist, musician, songwriter and producer, best known as half of the Grammy-awarded rock and soul duo, Hall and Oates
• David Leisner, a classical composer and performer, and co-chair of the guitar department at Manhattan School of Music • Shelby Lynne, a Grammy-winning country music singer/songwriter
• Blues diva Ana Popovic who is described as a triple threat – excellent singer, guitarist and songwriter.

Also returning will be the 2013 Chairman’s Young Artist Scholarship winner Emily Elbert, a rising young guitarist and singer/songwriter and Berklee graduate, who will perform at the Festival.

2013 Videos: Please enjoy these highlight and performance videos from the 2013 event and upcoming AIR line up!

The Crown of the Continent Guitar Festival | 2013

The Crown of the Continent Guitar Festival | 2013 Performance Highlights

“We have assembled an incredible array of judges who are some of the best musicians on the planet,” said Ritenour. “When busy people with this level of talent devote their time to this endeavor, the musician community affirms its commitment to cultivating the next generation of great players.”

Four grand-prize winners (one in each instrument category) will win an opportunity to perform at the 2014 Montreux Jazz Festival. In addition to being invited to record on Ritenour’s forthcoming 2014 Concord album, the Six String Theory guitar Grand Prize winner will appear with Ritenour and other guitar legends at the “Legends of Guitar” concert at Montreux, to be filmed in HD. Additional prizes include: four full scholarships to the Berklee College of Music; Yamaha instruments and endorsements; Crown of the Continent Guitar Workshop scholarships; and more.

Registration is open through May 15, 2014. All applicants must submit two YouTube videos via the website, www.sixstringtheory.com. Guitar applicants may register in the genres of rock, blues, jazz/fusion, acoustic, classical/flamenco and country. For Rhythm Players, any contemporary music style will be accepted including jazz, fusion, R&B, rock, blues and others. To access video of contest guidelines narrated by Lee Ritenour and filmed by Yamaha, please see the links below. 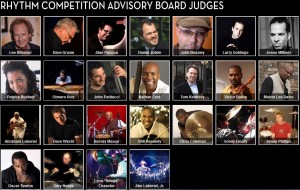 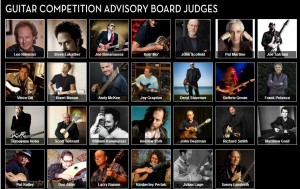 30 day countdown for registration closing on 2014 “Six String Theory Music Competition” .  Receiving applicants in Guitar, Bass, Piano/Keys and Drums so show us what you got! 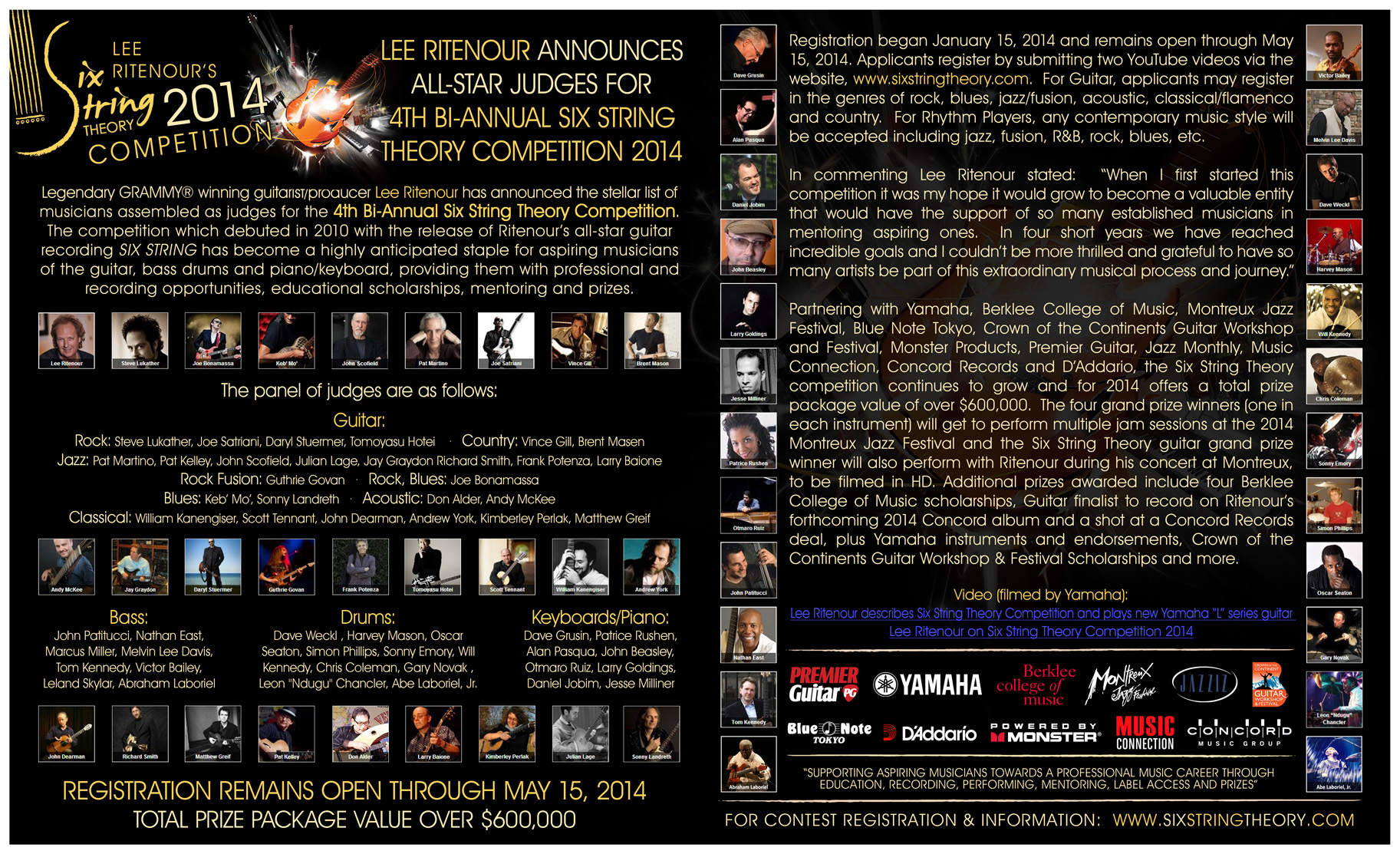 We are extremely proud of our first year winner, guitarist Shon Boublil, who is just getting ready to graduate from Berklee College of Music on the 4 year scholarship he won in the competition!  Shon has racked up incredible achievements while at Berklee and has performed with some amazing artists including Lee Ritenour and Sonny Landreth.  He opened the show for Lee playing solo  in 2012 and said it was a great experience. He also opened  for Sonny Landreth at Peter’s Player in 2013.  Graduation ceremony at Berklee will take place on the May 9th and he has his final recital on April 16th.

“Taking part in 6 String Theory competition and CD was a great honor for me.  I’m really proud to be associated with the competition as it has opened up many music opportunities which were nonexistent before. I’m starting my 4th semester at Berklee with a 4 yr scholarship I won in the contest. I have performed solo, in duets on stage with violinists, pianist, singers and with various student jazz bands.  I’ve also played my guitar for several student film scoring projects. I’ve played jazz, blues, classical, Latin and ethnic music. The diversity here is simply inspiring and I’m enjoying absorbing it all. Berklee is a lot more than what I imagined it to be.” 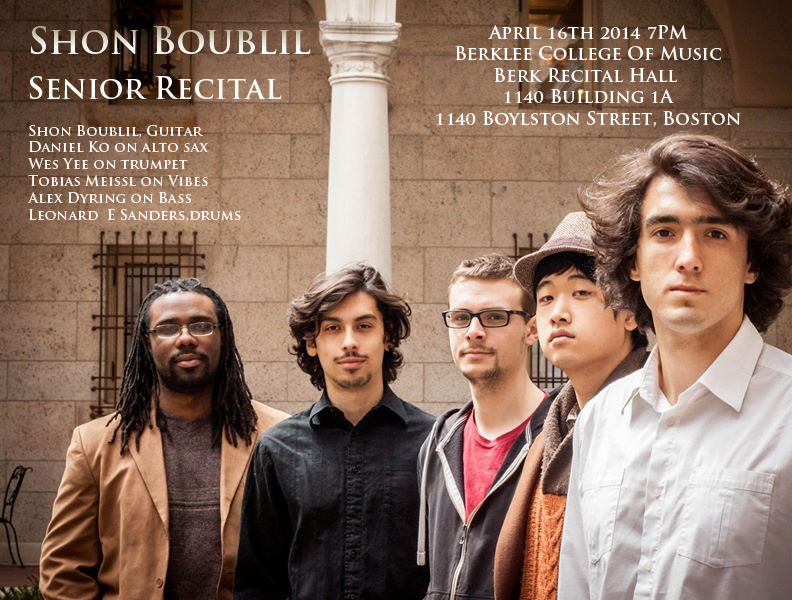 Get your videos ready to upload as we’re in the final stretch of open registration until May 15, 2014.  We are looking forward to hearing your music skills in Guitar, Bass, Piano/Keyboards and Drums.  Please email if any questions: 6stringtheory at gmail.comGood luck!