MAY 1st DEADLINE TO ENTER 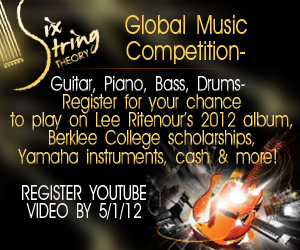 (Los Angeles, April 22, 2012) If you play piano, bass or drums and aspire to be a professional musician, here’s your opportunity.  By entering the Inaugural Lee Ritenour and Dave Grusin Rhythm Section Competition you can be one of three musicians chosen to record a track with legendary guitarist Lee Ritenour to be included in his forthcoming album RHYTHM SESSIONS, scheduled for an autumn release on Concord Records.  As winners of the competition, you join the likes of special guest artists appearing on the recording, including:  Oscar and Grammy Award winning musician/composer/producer Dave Grusin, (head of the advisory board of the Rhythm Section Competition), George Duke, Stanley Clarke, Chick Corea, Kurt Elling, Zamajobe, Nathan East, Will Kennedy, Dave Weckl, John Beasley, Sonny Emory, Larry Goldings, and more.

Announced earlier this year, the Rhythm Section Competition marks an expansion of the Yamaha 6 String Theory Guitar Competition founded by Ritenour three years ago, in conjunction with the release of his hit all star recordingSIX STRING THEORY.  The album culminated in being named “Best Album of the Year” by Guitar International, Publisher’s Album of the Year by Jazziz Magazine and Ritenour receiving a Lifetime Achievement Award from Guitar Player.   The winners  to date are Canada’s Shon Boublil (2010) and Ireland’s David Murray (2011), who represent the global reach of the competition, which has garnered applicants from over 45 countries.   May 1 also marks the deadline for the 3rd Annual Yamaha 6 String Theory Guitar Competition, which is in partnership with Yamaha, Berklee College of Music, Crown of the Continent Guitar Foundation and the National Guitar Workshop.

Prizes for the Guitar Competition include Berklee College of Music Scholarship, professional recording and mentoring opportunities, a weeklong stay at the four-star Flathead Lake Lodge in Bigfork, MT for a party of two ($8,000 value), a potential Concord Records recording contract, 36 National Guitar Workshop scholarships, 6 Crown of the Continent Scholarships, Cash, Yamaha Guitars & endorsements as well as other prizes from Monster, D’Addario Strings, and others. There is a special cash prize of $2,500 awarded to the Classical Guitar Finalist (courtesy of sponsor James Stroud), as well as $500 cash prize to each of the 6 Guitar Finalists. In addition to recording on Ritenour’s forthcoming album, Rhythm Section prizes include Berklee College of Music Scholarships, Yamaha instruments; professional mentoring; an opportunity to perform at the esteemed Crown of the Continent Guitar Workshop and Festival in Montana Aug. 26-Sept. 2, 2012 and other prizes from Monster.  Total value of 4 prize packages over $600,000.

To further information, to register and for complete contest rules, regulations and prizes visitwww.sixstringtheory.com